Epictetus, the Greek philosopher said “It’s not what happens to you, but how you react to it that matters”.

In the face of crisis management, these wise words were clearly understood by none other than ‘The Colonel’.

KFC (also proving strategic print advertising is far from dead) not only held their hands up to apologise to the nation. But in a master stroke, they also took back control of the negative media coverage.

In shifting the K to the end of their logo (which no doubt made the brand police’s nose bleed) they astutely shifted the entire story. The subsequent column inches and news articles were suddenly focussed on their candid apology, not the supply chain screw up.

Like me, thousands of people discovered the story through social media. It’s no accident that the respect garnered from the creative apology became a viral hit. People sharing ads is always going to be a marketer’s dream. People positively sharing your apology is more or less unheard of.

Whilst KFC’s creative agency (Mother) were behind the ad, I doth my cap to the client who wasn’t chicken at all. They were brave. And more marketers should take note. Because they didn’t just apologise in the usual, mundane, corporate way. They did the decent thing and apologised authentically and credibly.

Honesty and genuine transparency are the morals of this story. 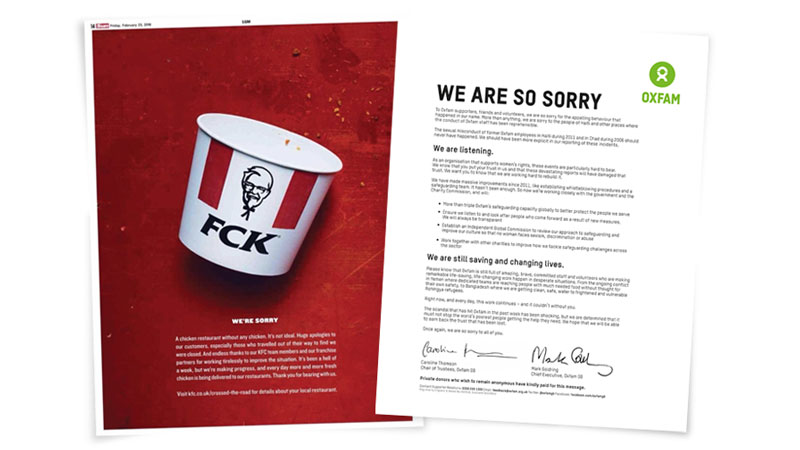 Unlike Oxfam, KFC didn’t have to apologise. The difference being, consumers read KFC’s apology and respect grew as a result. I doubt half as many people read Oxfam’s obligatory “we are so sorry” ad – complete with “we still need you” undertones.

I appreciate that the Oxfam and KFC crises are completely incomparable. I just don’t think Oxfam’s apology should’ve included an appeal for continued donations. It wasn’t the right time in my opinion.

Every brand communication is marketing. And the point of marketing is to make a good impression and be remembered. After the dust has settled, we won’t remember the KFC supply chain crisis. But we will remember how they dealt with it. Positively.

If you have any questions or would like to arrange a meeting, simply complete the following fields and we’ll get back to you shortly.